Situated in the heart of the Alps, facing Mont-Blanc, Les Arcs ski resort is a collection of 4 purpose-built villages constructed in the 1960s and 70s at different altitudes: Arc 2000, Arc 1950, Arc 1800, Arc 1600, all connected to the valley village of Bourg-Saint-Maurice.

Les Arcs is a ground-breaking ski resort that opened in 1968. It was the first of its kind, as it was purpose-built to give visitors access to the slopes from their doorstep.

The resort is made up of several villages and is known to be family-friendly, but it caters to all skiers and snowboarders. it also connects to La Plagne via the Vanoise Express gondola. Together the two resorts form the majority of the Paradiski ski domain. But the more traditional villages of Plan Peisey, Vallandry and Peisey Nancroix extend the area to give you 425km of pistes to explore.

Since Les Arcs opened, it has undergone some changes and now comprises of four modern villages, Arc 1600, Arc 1800, Arc 1950 and Arc 2000. Each village provides direct access to the ski slopes for the ultimate convenience.

Most of the villages are pedestrianised and have their own amenities. So, you can expect everything you need no matter which one you stay in, including supermarkets, bars, restaurants, and various activities.

However, Arc 1800 is best if you want easy access to the best bars and restaurants, while Arc 1600 has a more traditional village feel. Arc 2000 has the best snow from your door due to its higher altitude, but Arc 1950 features modern accommodation built in a classic style. Some of these lodgings are stunning 4 and 5-star hotels and apartments. They also have luxury spas to soak tired legs at the end of your day.

For when you’re not skiing or snowboarding, you can take advantage of various swimming pools and an ice rink. You can see the area from another perspective on snowshoes, by dog sled, paraglider, or snowmobile. Les Arcs is also home to France’s largest igloo village and has an ice cave to explore in the evenings or when you want to take it easy.

Les Arcs’ slopes are remarkably varied, from beginner to expert, including some seriously steep ungroomed black runs and plenty of easy cruising.

Its ski area is linked to that of neighbouring La Plagne to form the huge Paradiski area with its 425kms of runs.

Les Arcs itself has 200 kilometres of ski runs, including the eight-kilometre Aiguille Rouge (Red Needle), which takes you from the highest peak in the resort at 3,226 metres to the hamlet of Villaroger at 1,200 metres.

Paradiski (3 resorts): Les Arcs, Peisey-Vallandry, La Plagne
The link between the 2 massifs is via the Vanoise Express, the world’s largest cable car.

Stay near bars and restaurants at Arc 1800, or choose the village atmosphere of Arc 1600.

Arc 2000 allows you to ski to and from your door, while Arc 1950 has modern apartment hotels built in a traditional-style.

Transfer time to Les Arcs from:

“Only 7 minutes with the NEW panoramic Funicular from Bourg St Maurice train station to Arc 1600 (fastest way). The Funicular is accessible from the railway station in Bourg-Saint-Maurice courtesy of a footbridge located at the end of the platforms”

*Transfer time is approximate, by private transfer vehicle and subject to weather and road conditions.
Shared shuttle/bus transfers have set departure times, take much longer to travel and don’t offer door to door service which is why we recommend private transfers only. 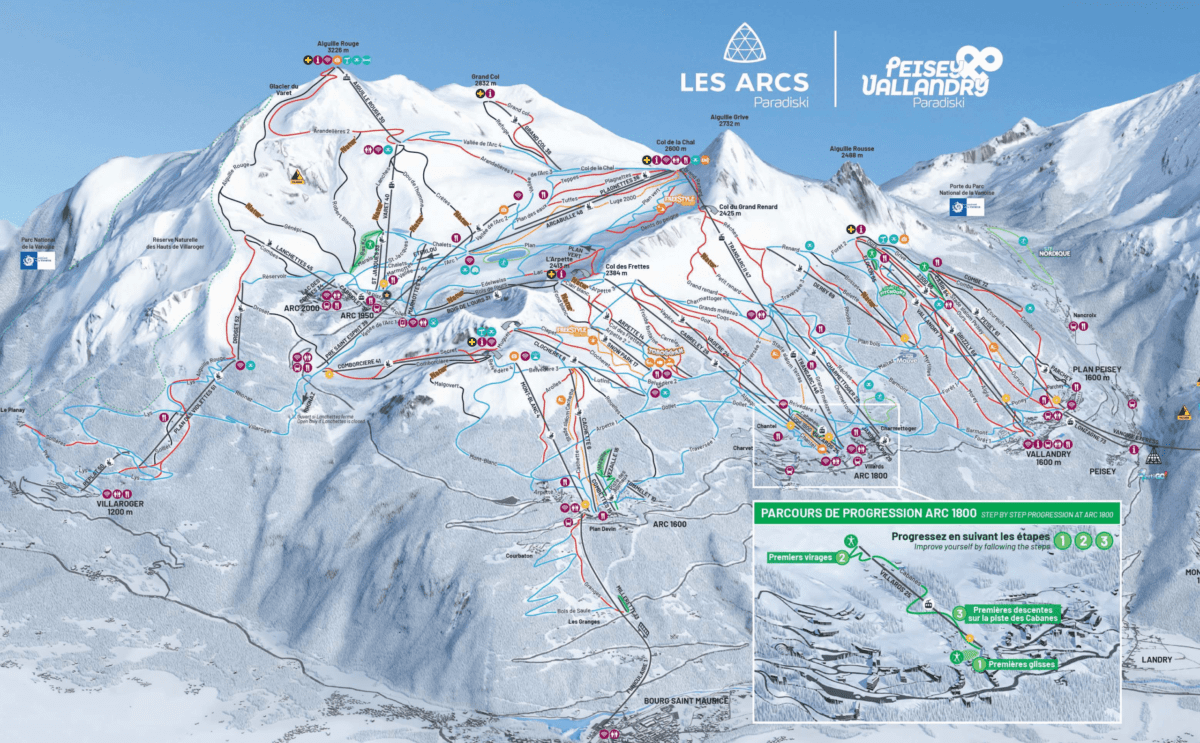 The high altitude 4 villages of Les Arcs (Arc 1950 & Arc 2000 are te best in our opinion) are part of the inredible Paradiski ski area which is linked to La Plagne via The Vanoise Express. Les Ars provides great ski-in ski-out access and is perfectly suited for families.
Watch this video to find out more… 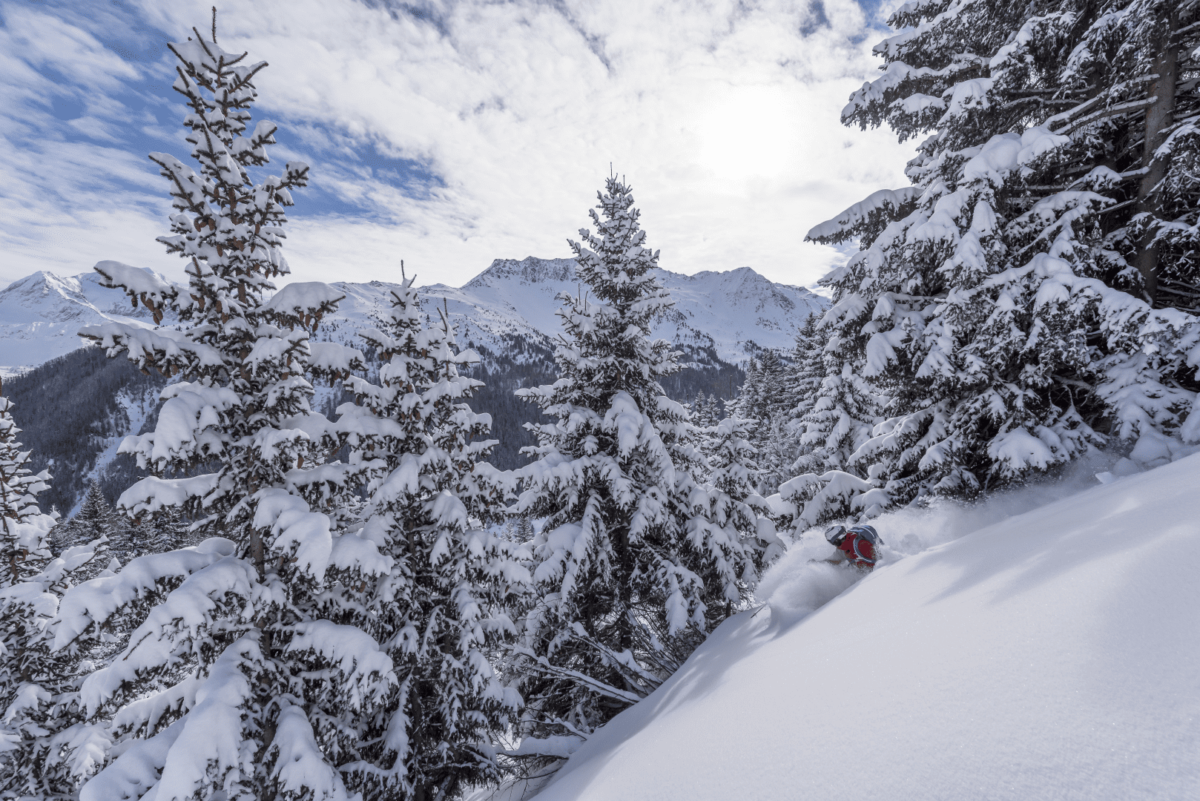 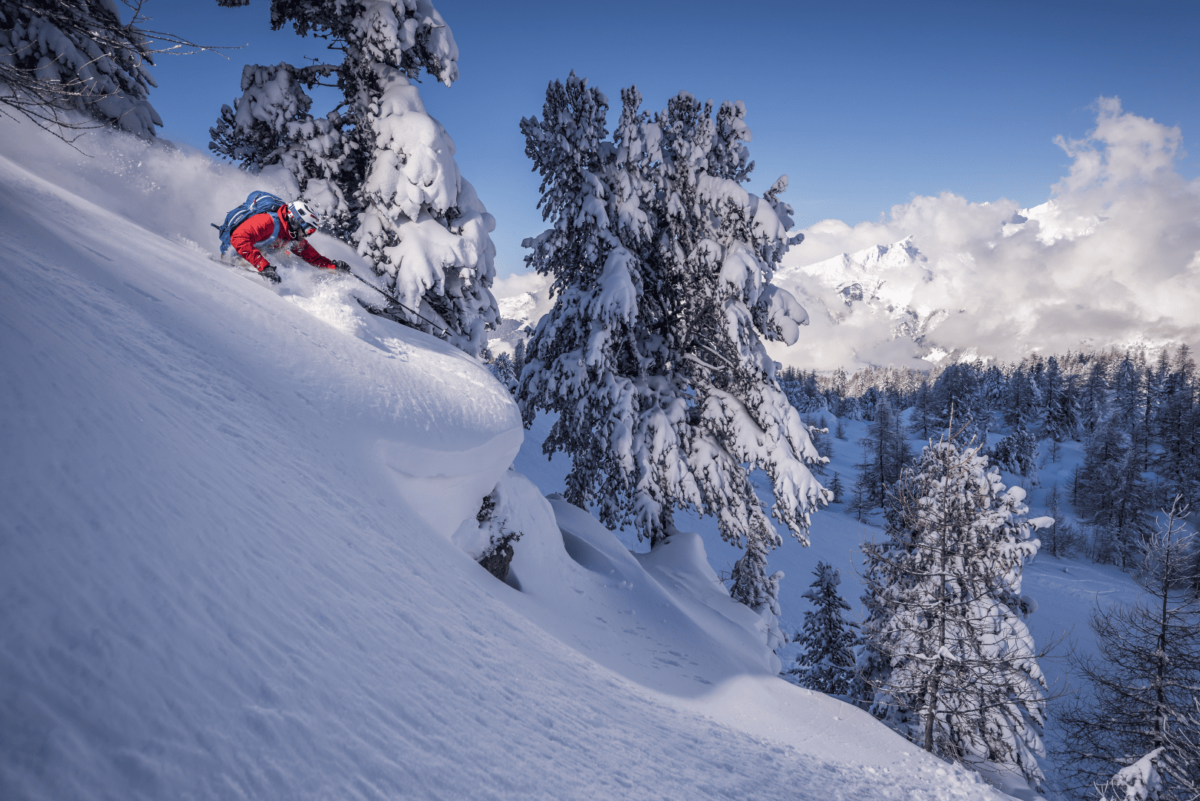 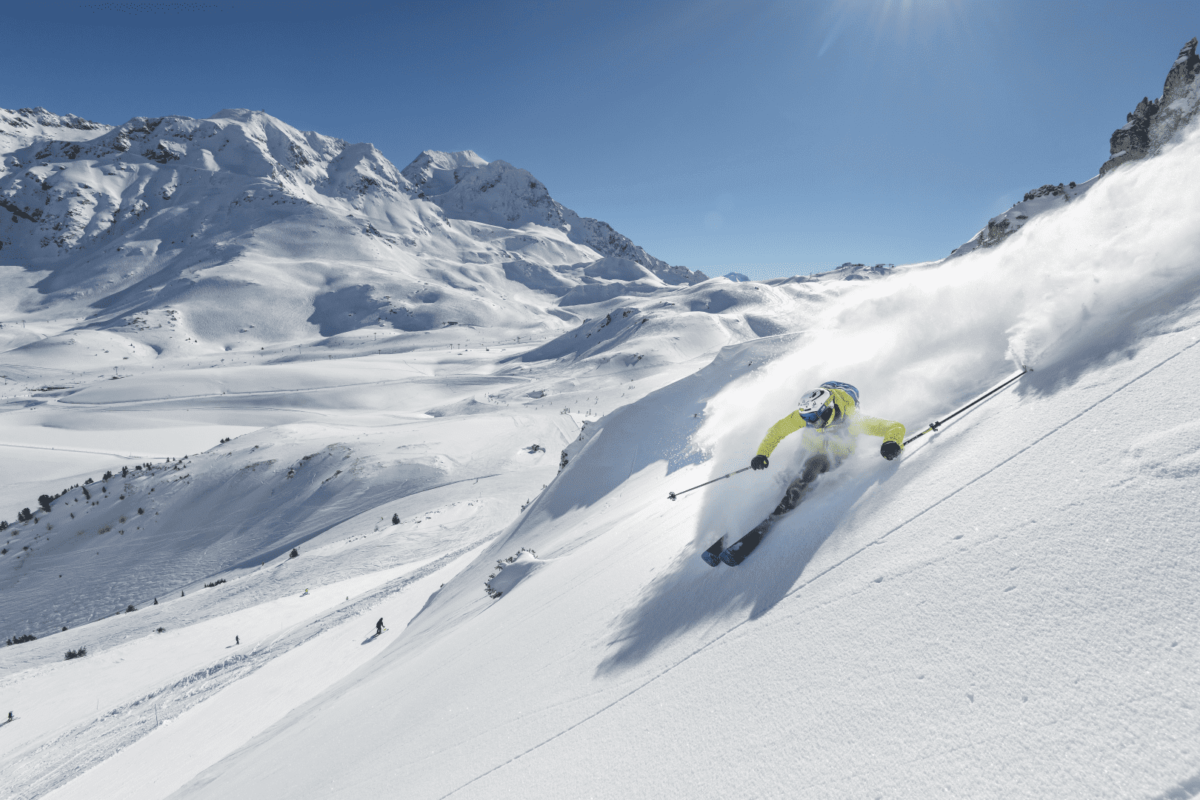 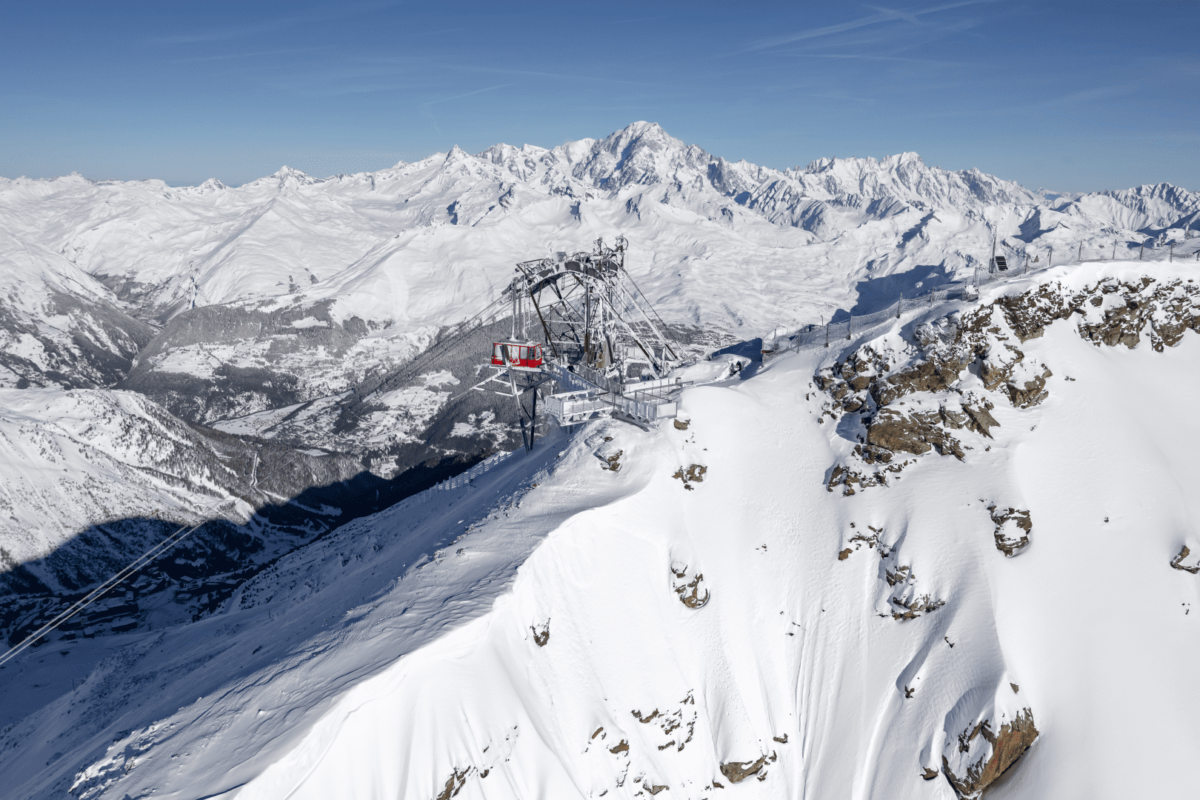 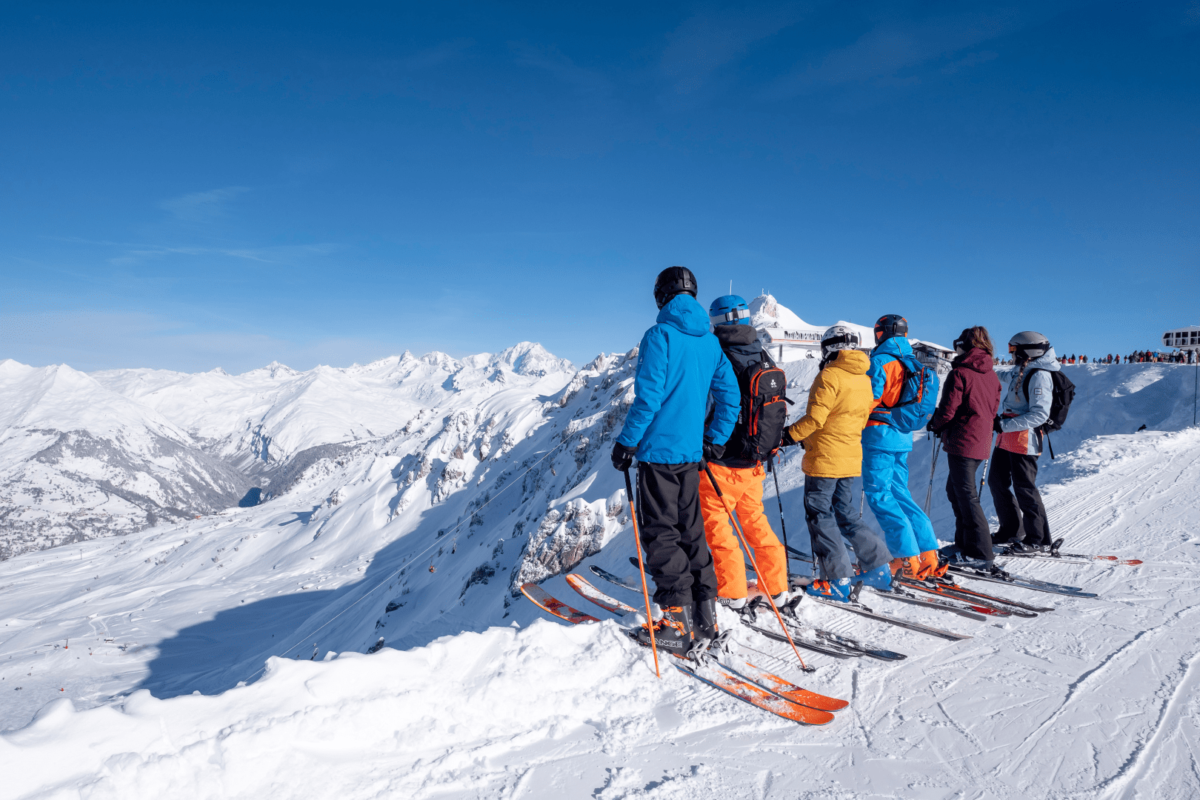 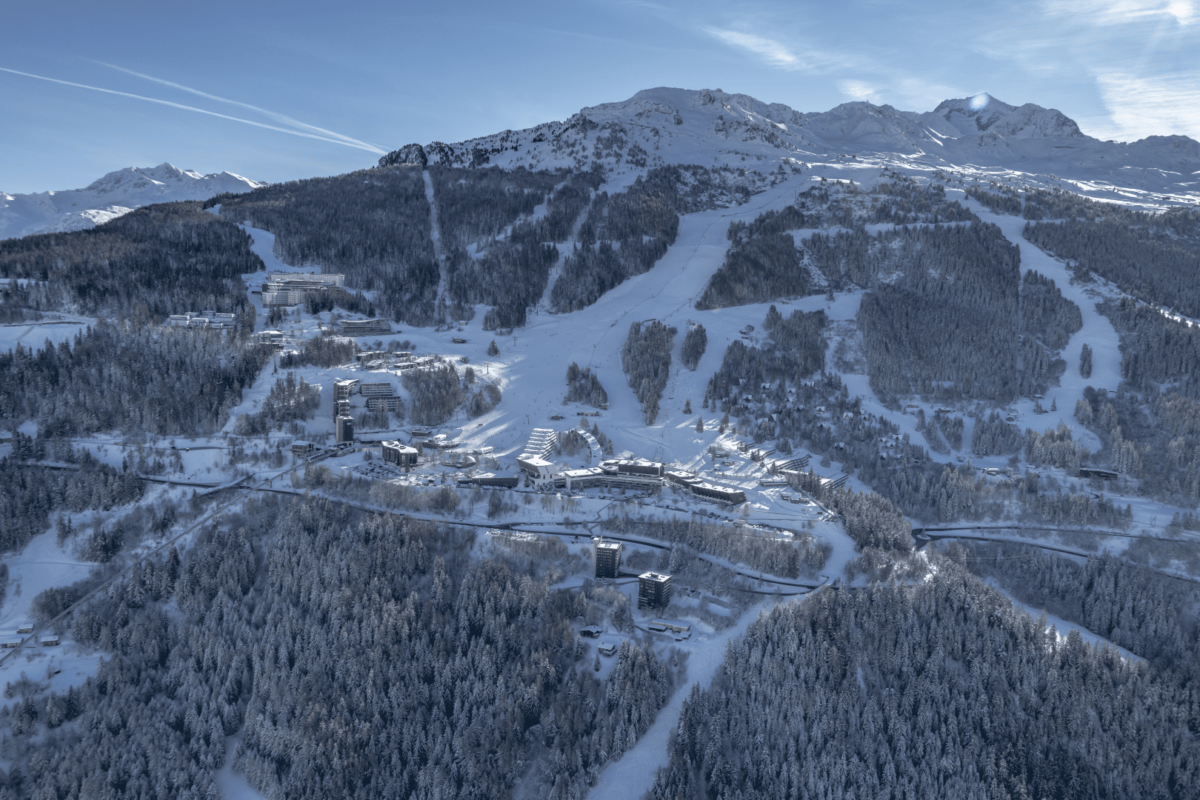 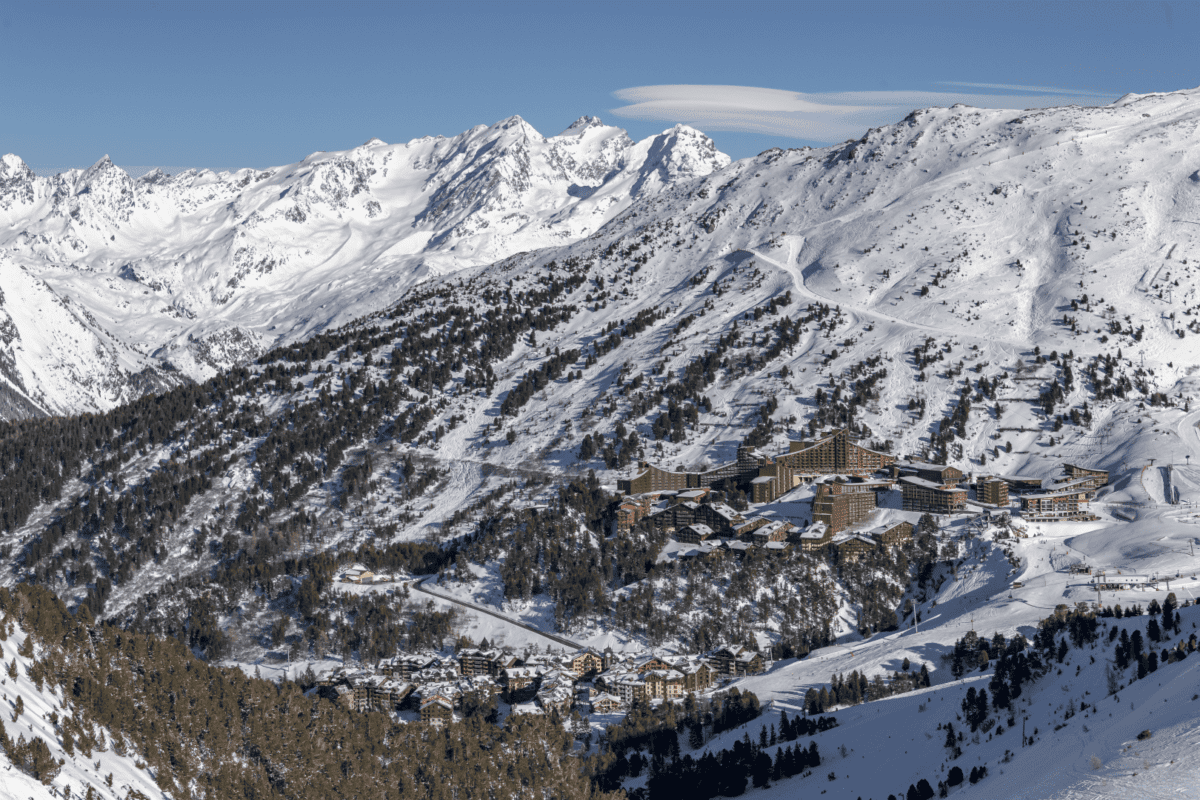 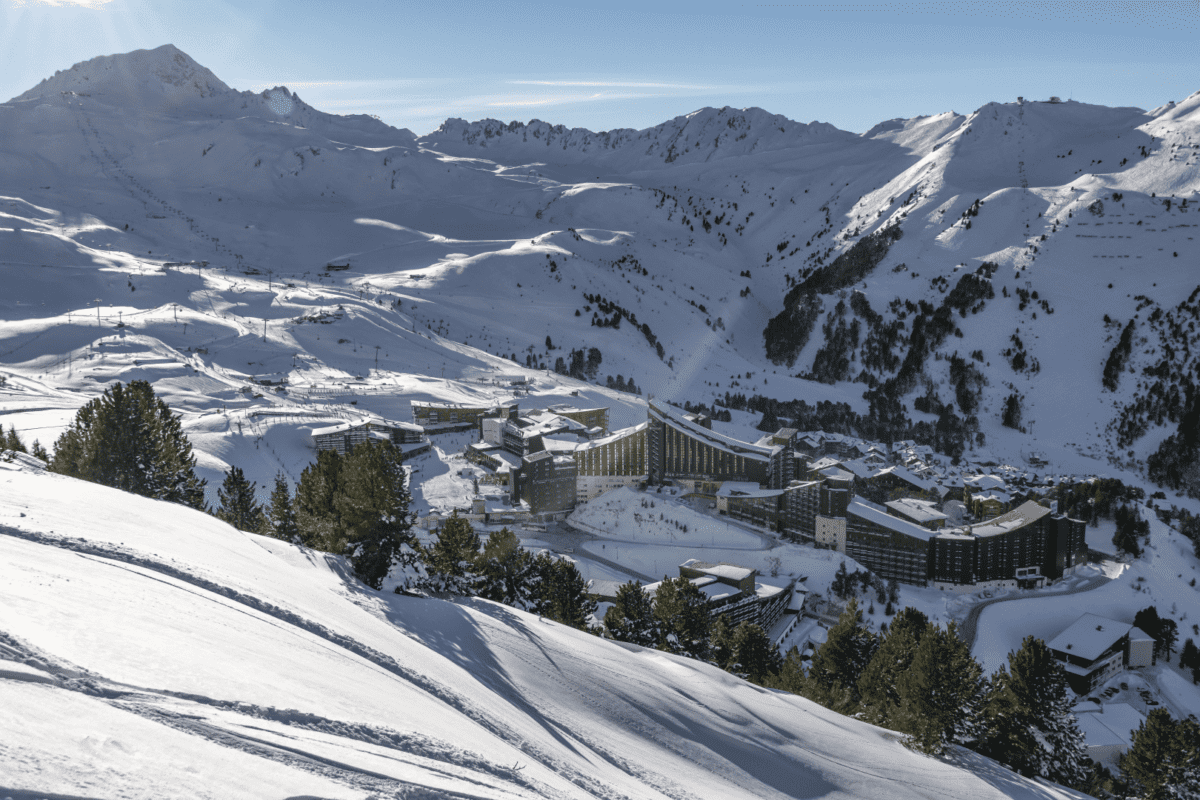 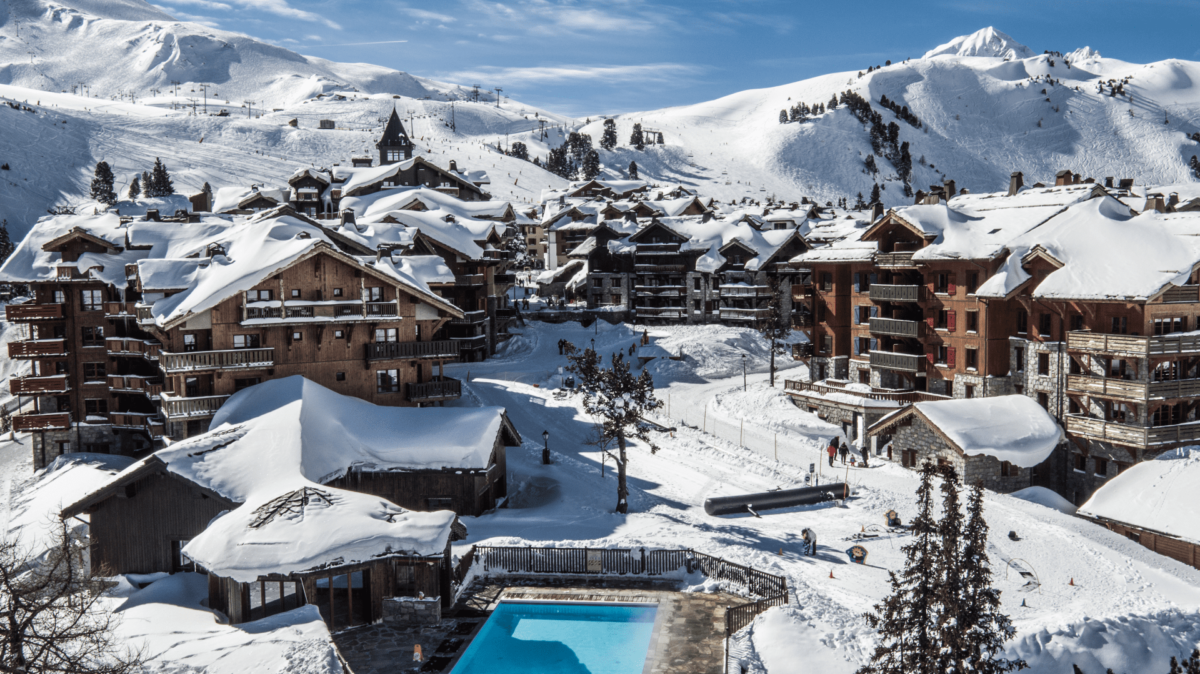 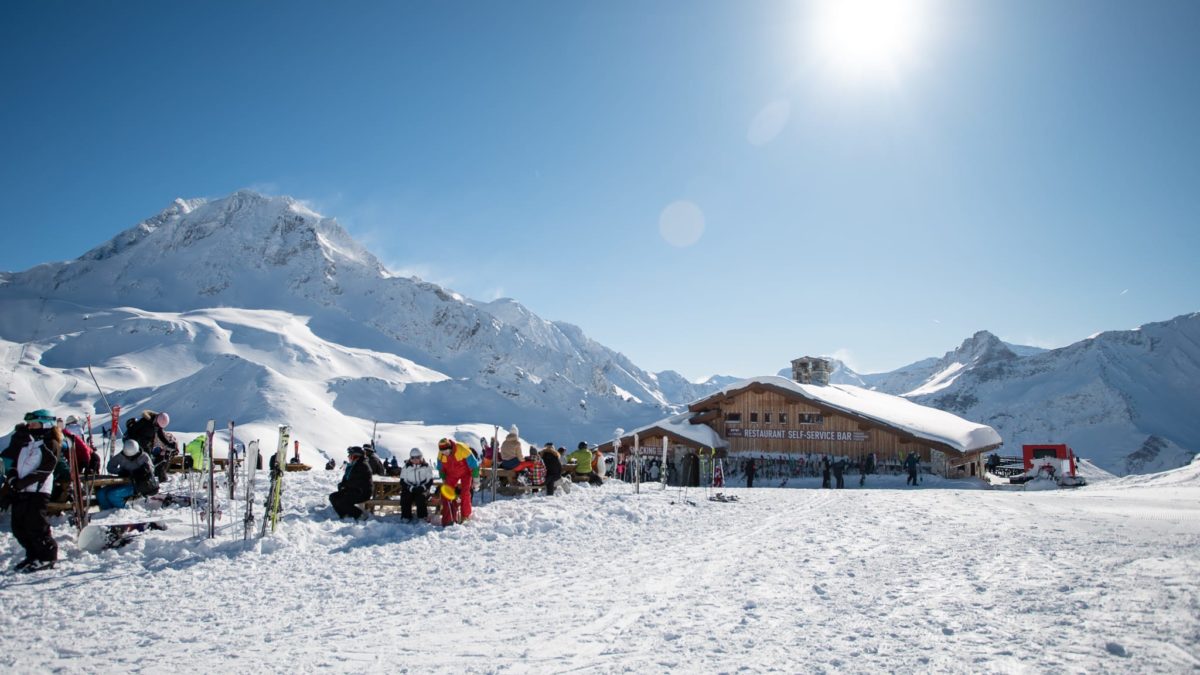 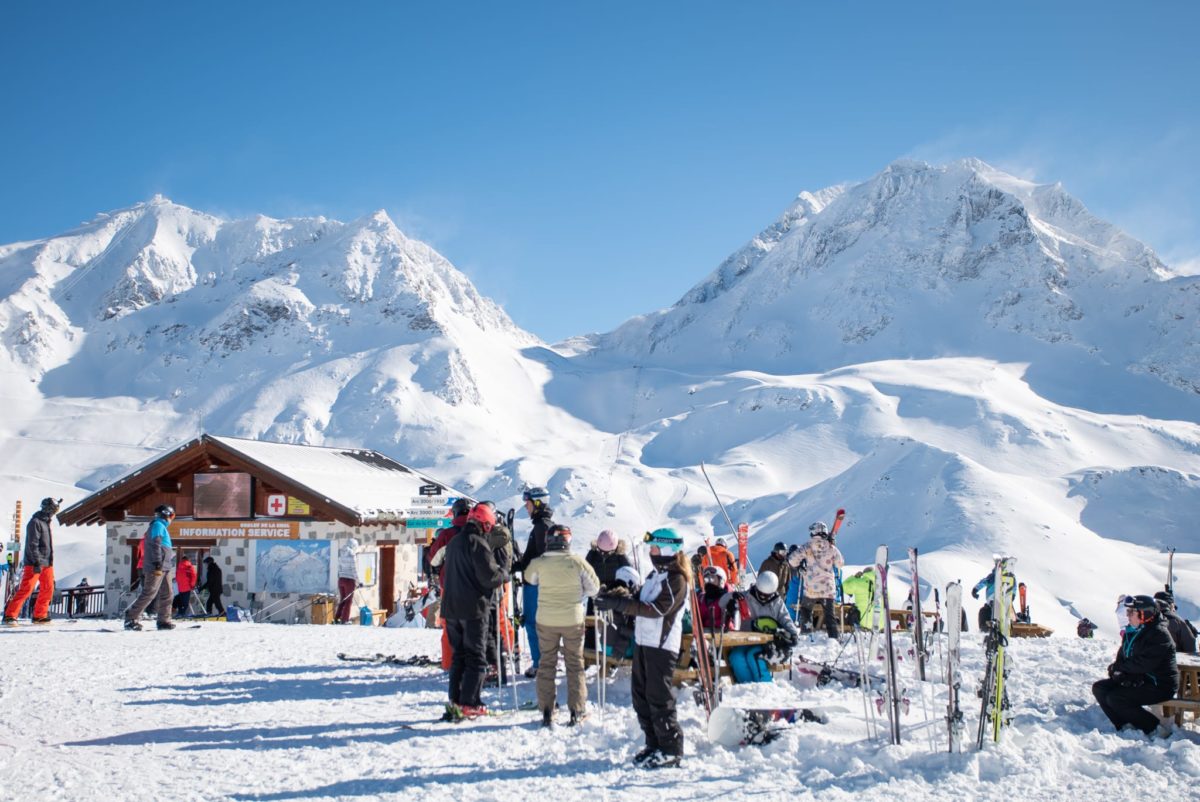 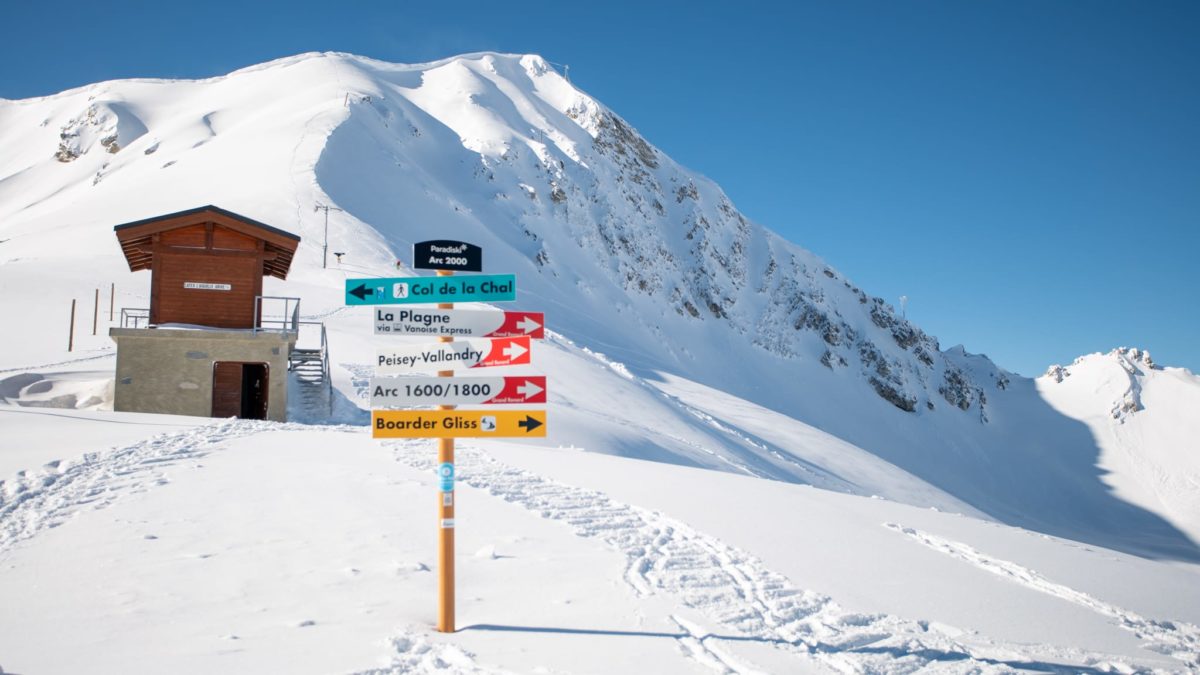 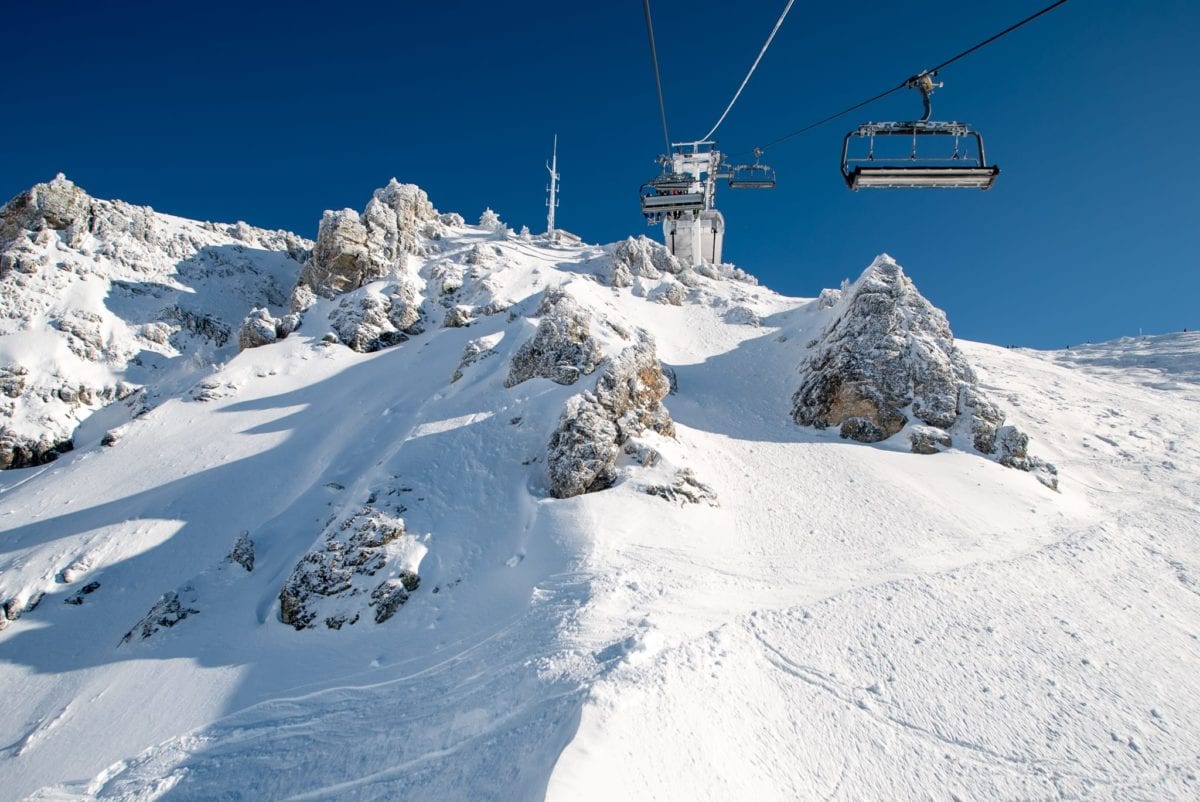 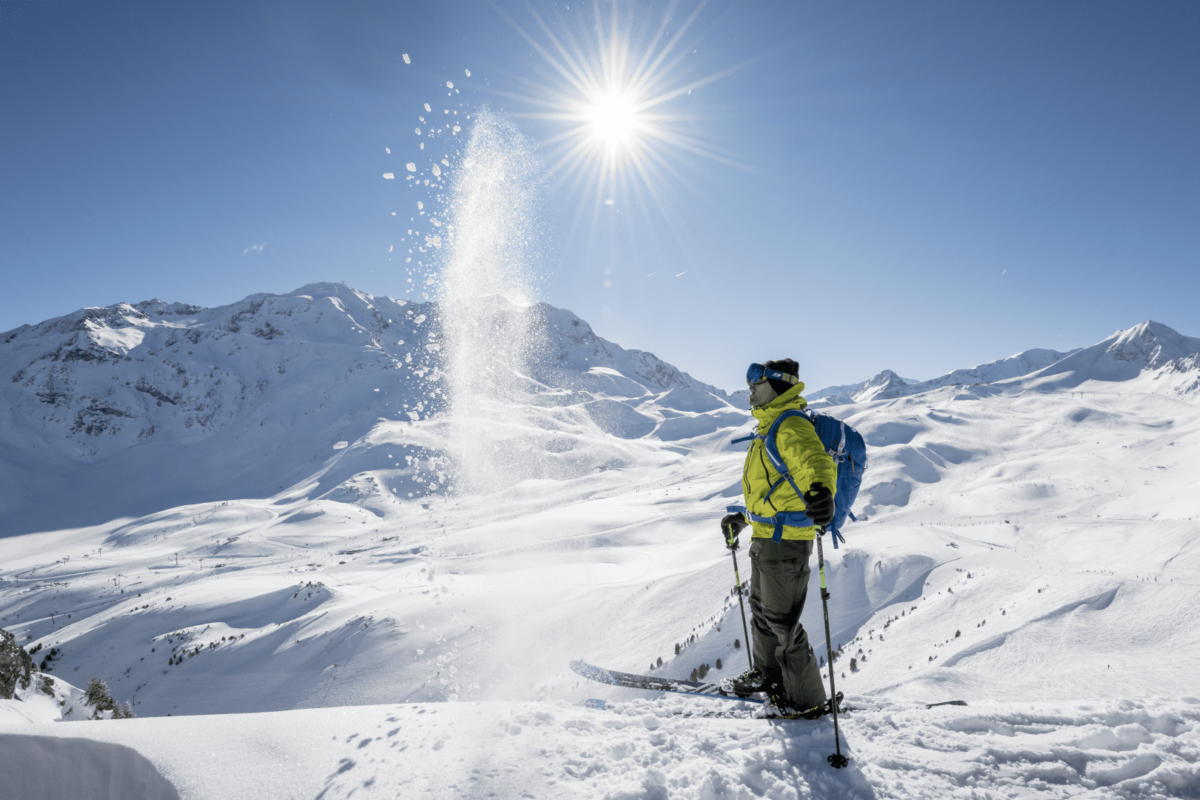 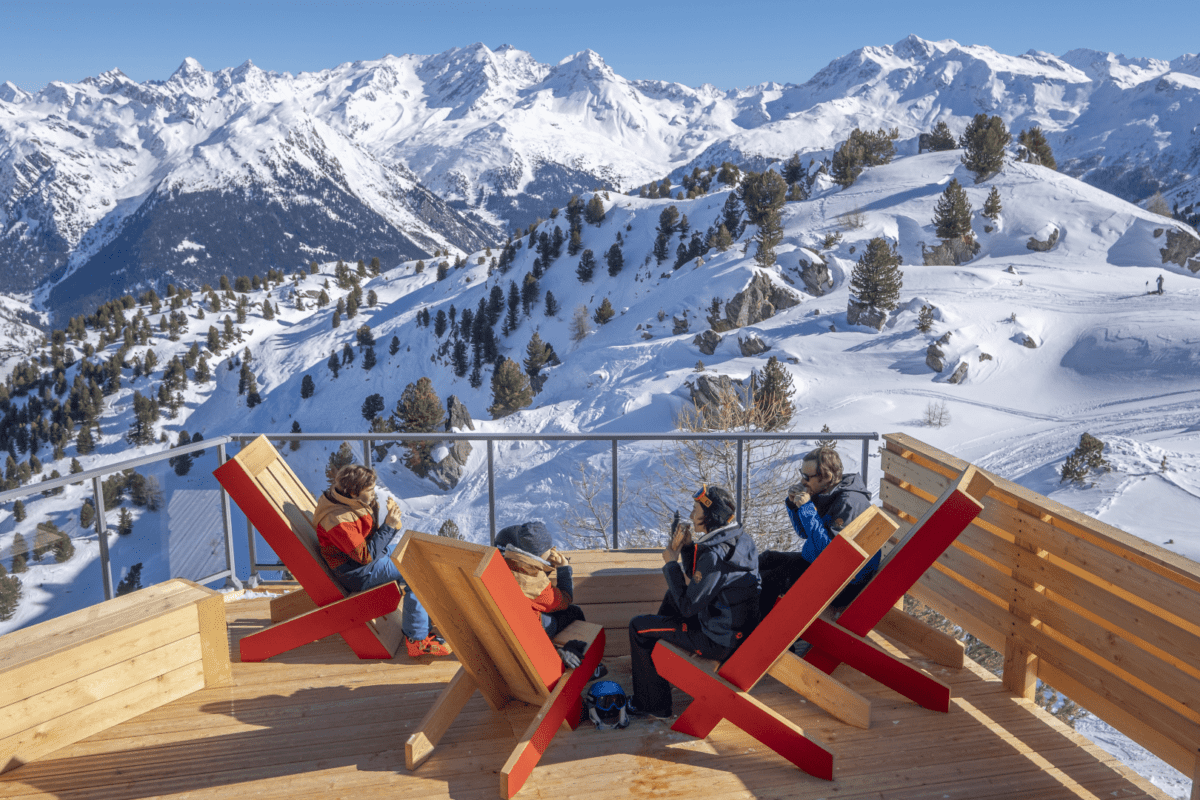 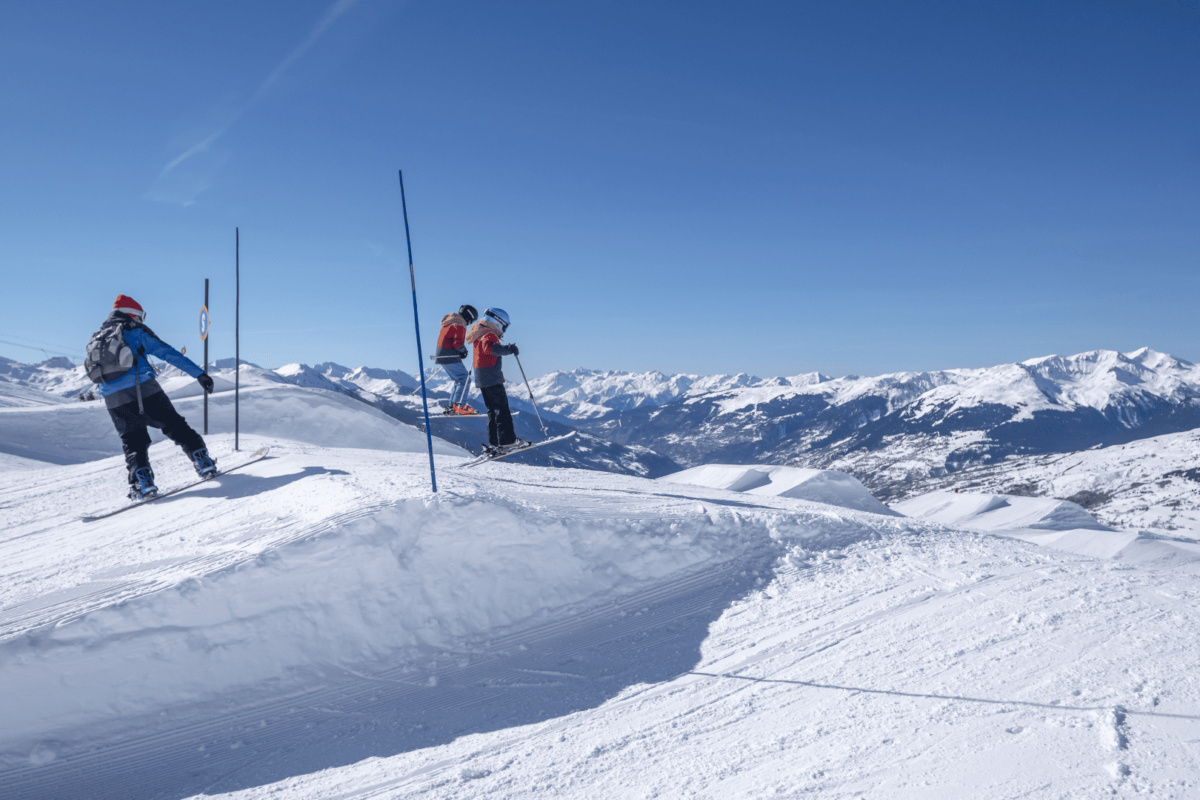 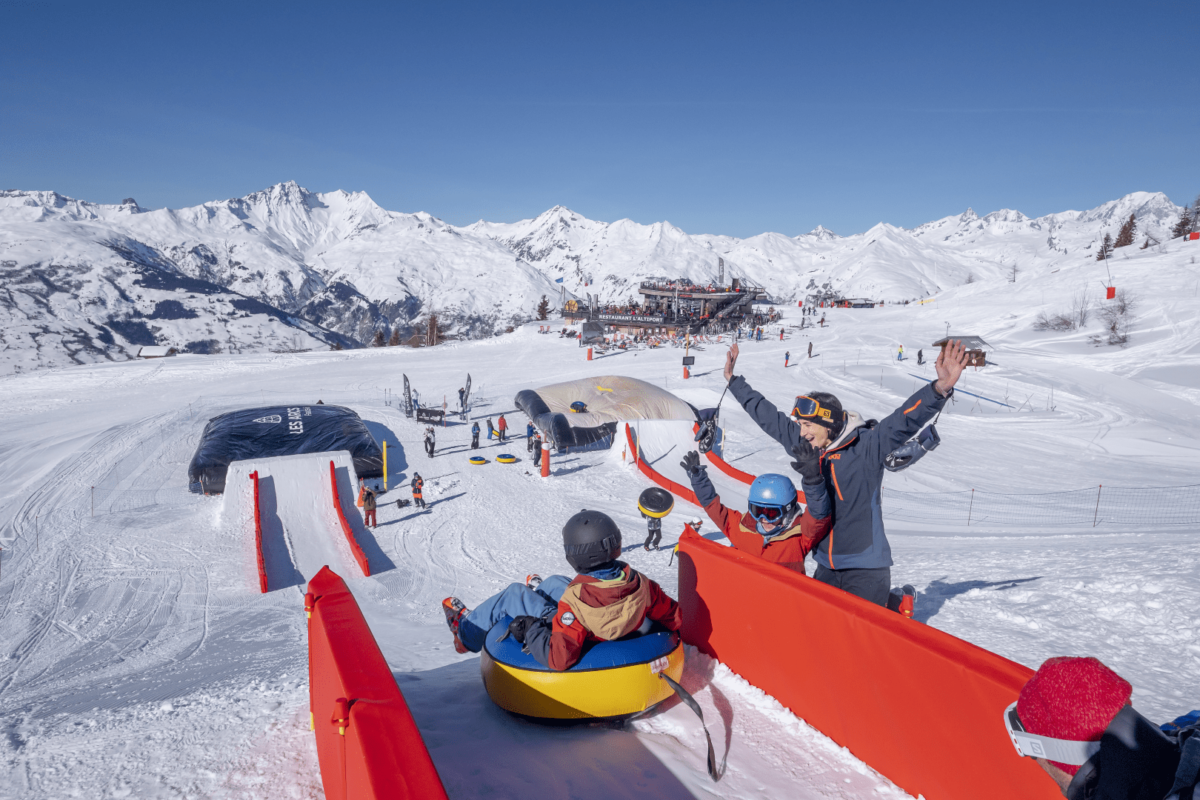 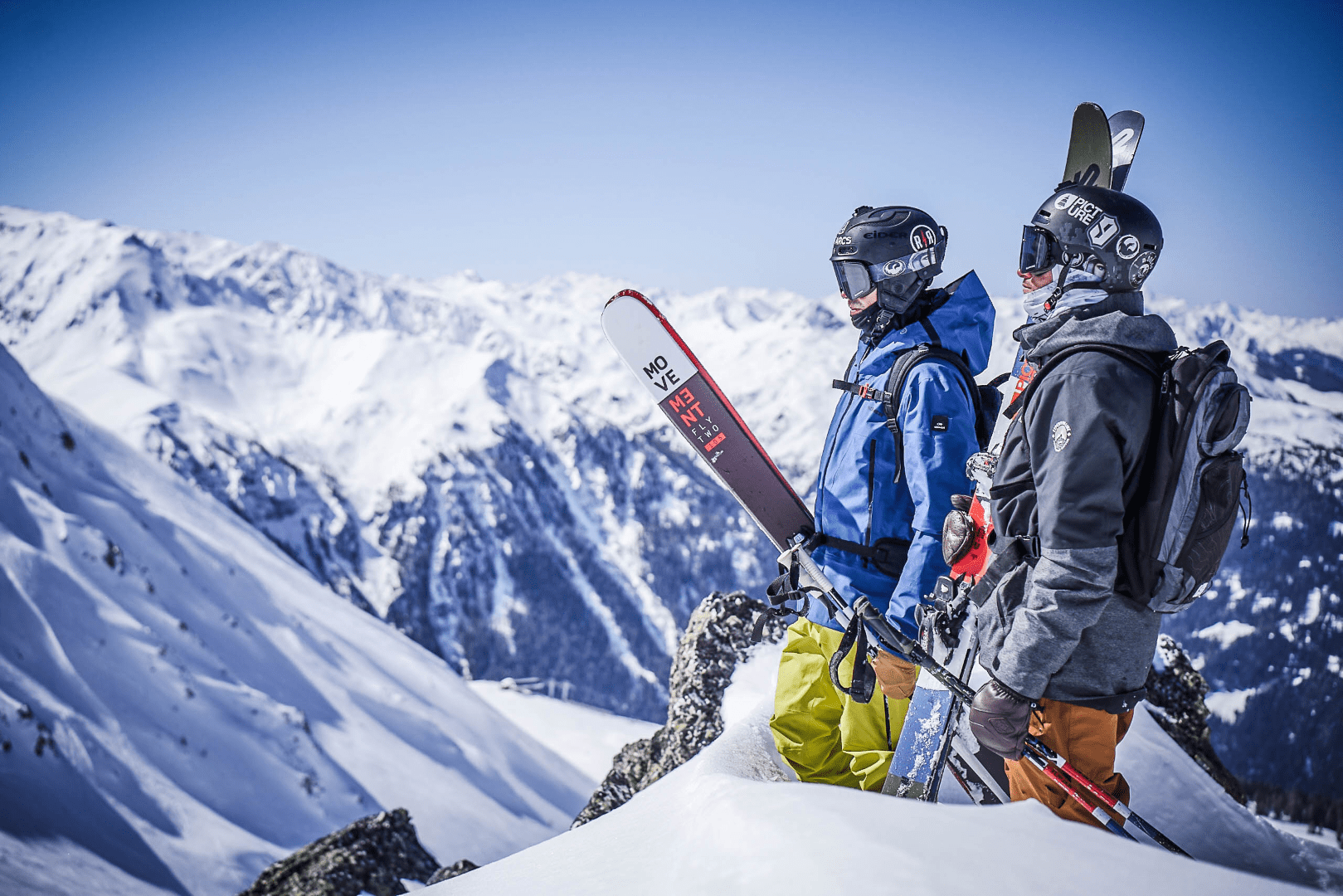 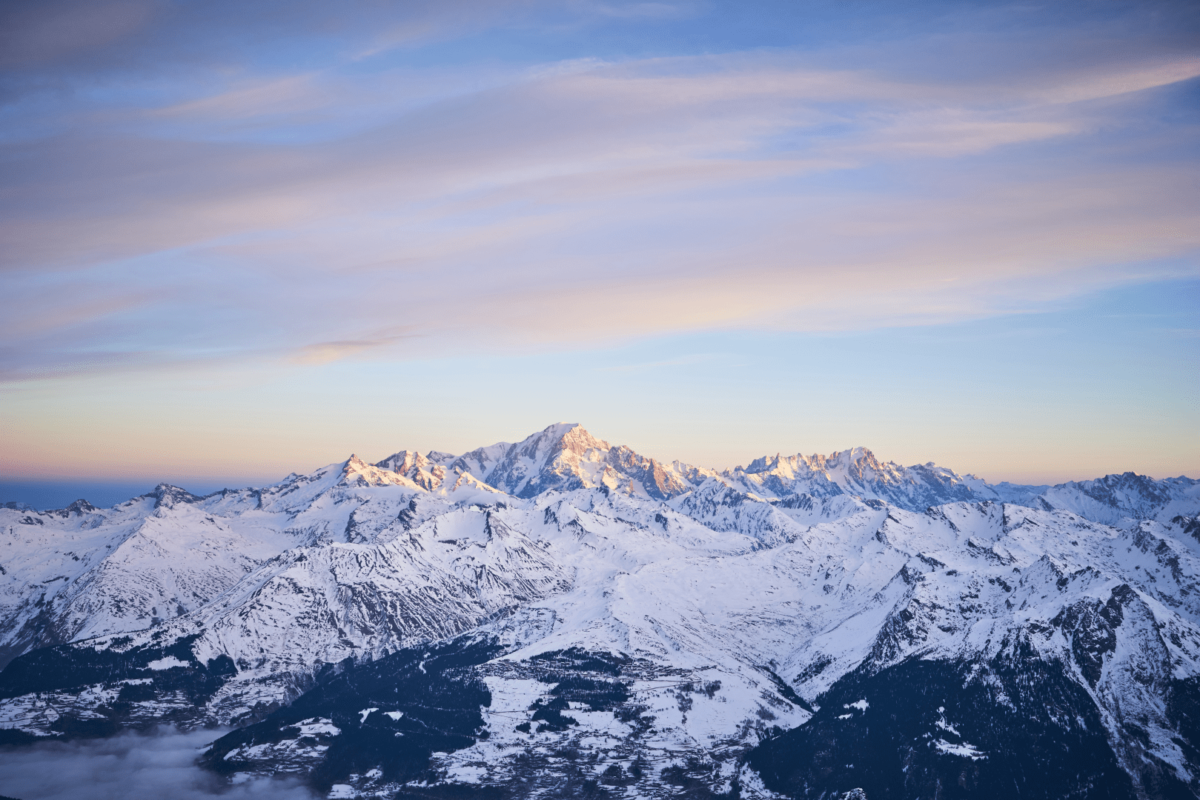 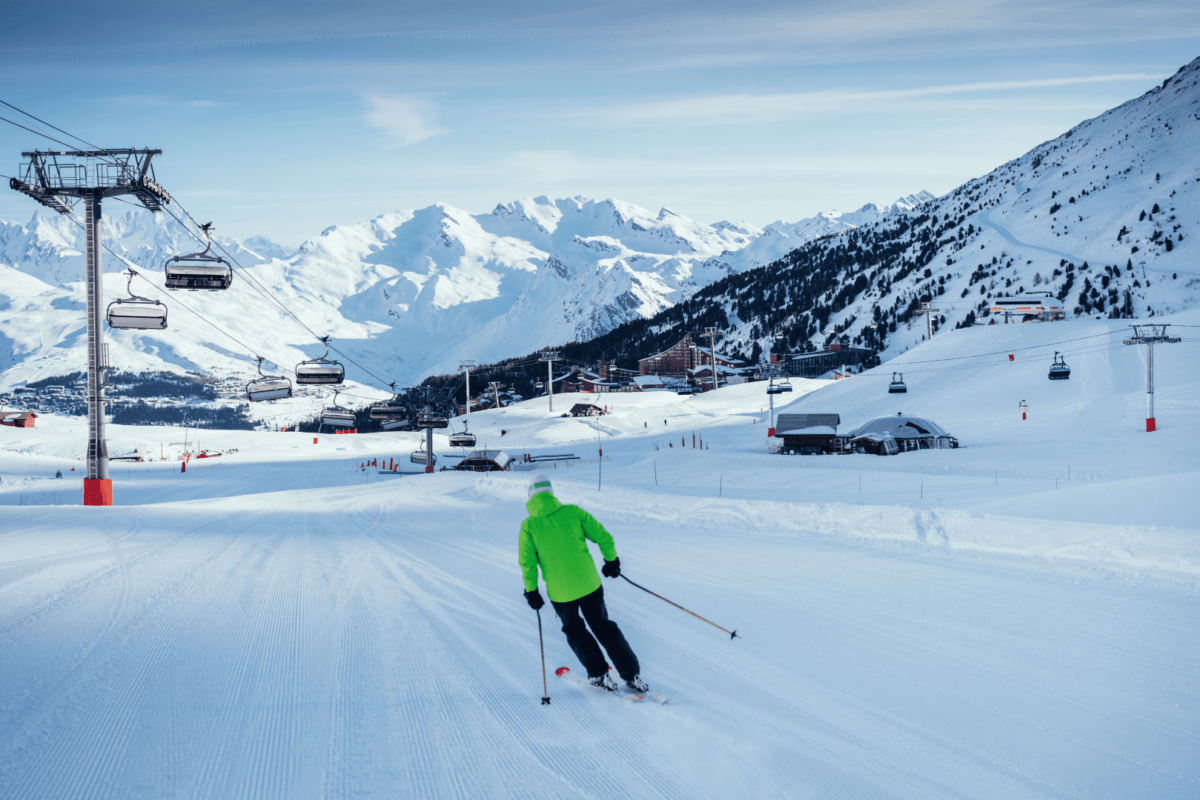 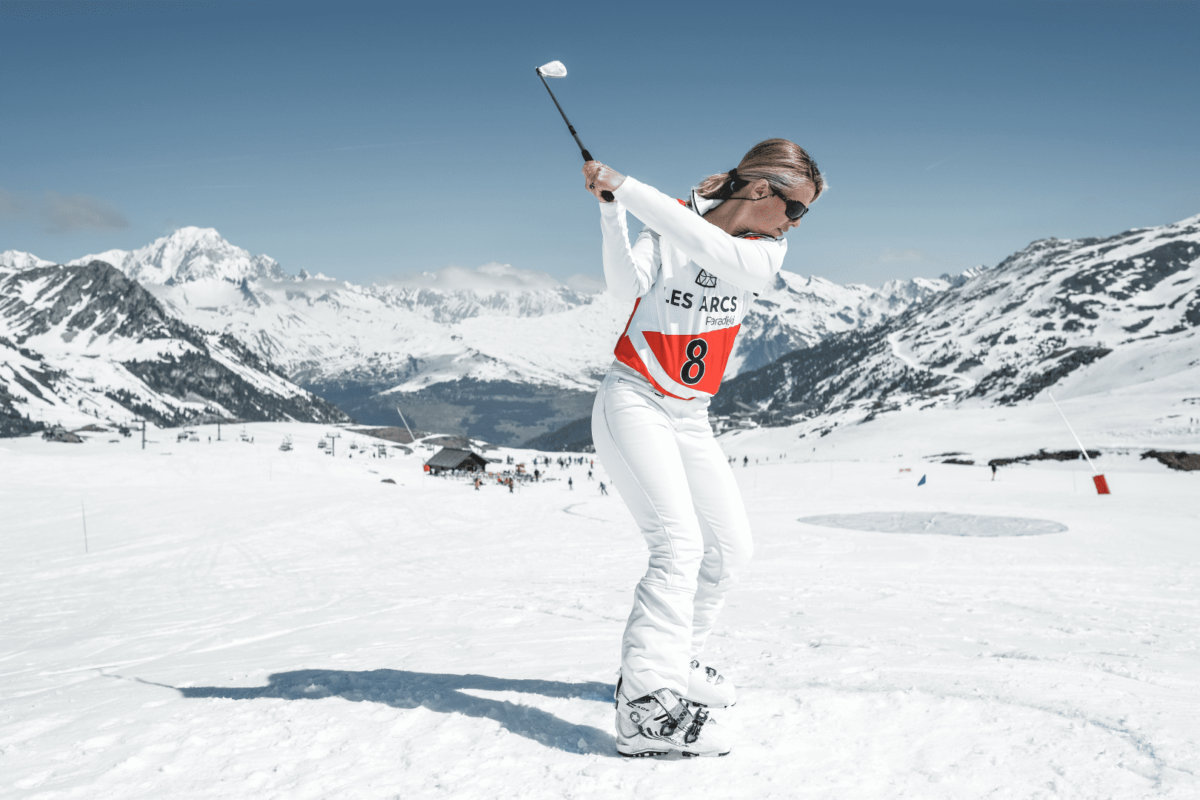 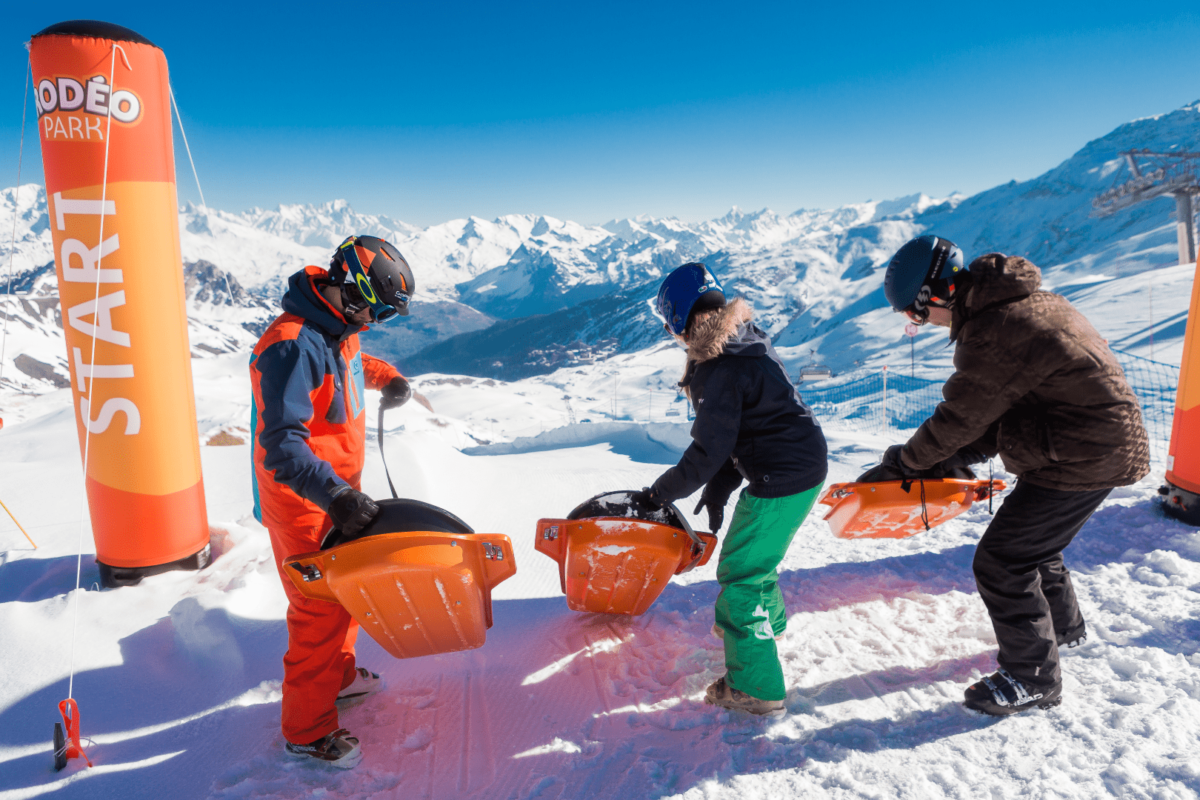 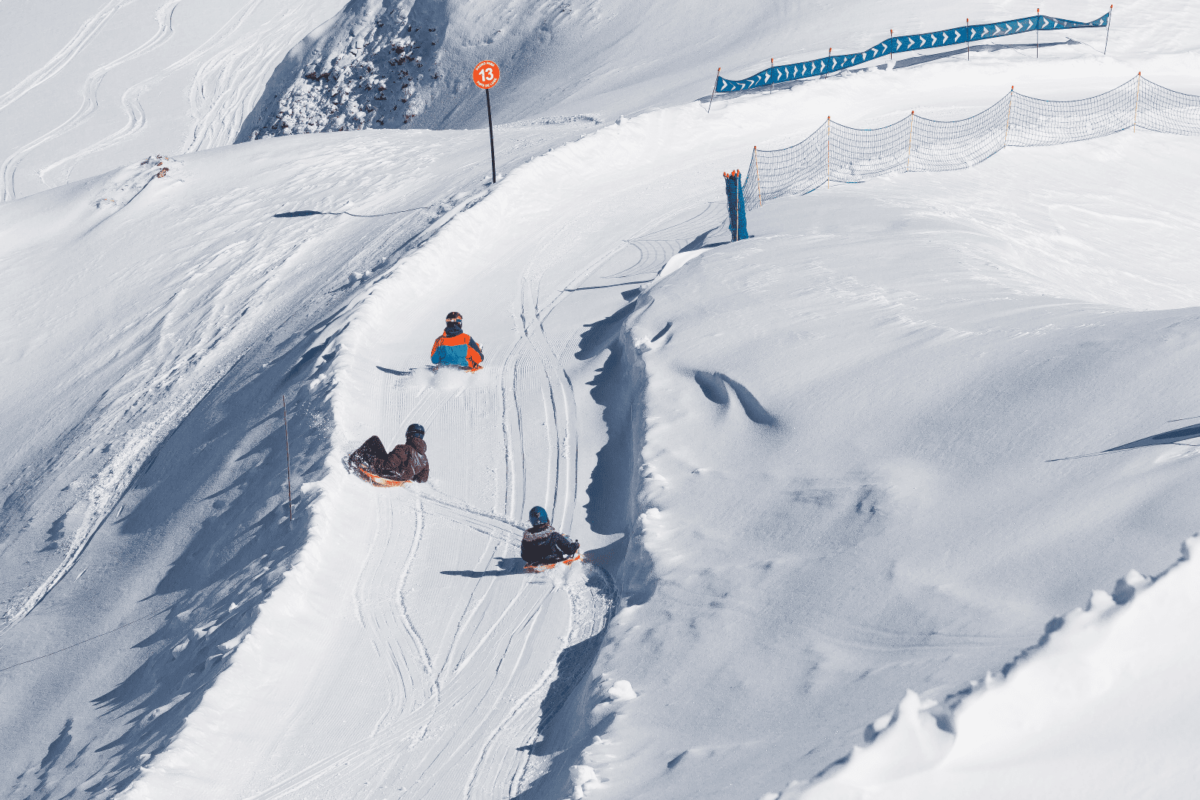 Besides the incredible skiing in Les Arcs, you can enjoy many winter activities such as sledging , snow shoeing, snowmobiling (including skidoos for children as young as 5 years old), helicopter scenic rides, heli skiing over in La Thuile (Italy), paragliding, speed-riding, ride an electric scooter on snow, snakegliss, snowscoot, ski joering.

Would you like to live like an Inuit for an evening? Make your dream come true and come and see the biggest Igloo Village in the French Alps and its ice cave! Perched at an altitude of more than 2000m, a themed setting made entirely of snow and ice awaits you in Les Arcs at the bottom of the Arcabulle chairlift. Ice cave, igloo bar, bedrooms, dining areas and a dance floor area are all part of the 400m2 igloo village for you to explore …

For bad weather days, there are plenty of non-skiing activities such as fitness centres, squash, yoga,  bowling, spas, swimming pools…

How do we get to Les Arcs?

Les Arcs is a 2 hour 20min drive by private transfer from either Lyon or Geneva Airport.

Which other ski resorts are part of the Paradiski ski area?

There are 3 ski resorts which are part of the Paradiski’s massive 425km of slopes (link via the Vanoise Express, the world’s largest cable car system) which include: La Plagne, Les Arcs and Peisey-Vallandry.

When is the best time to go skiing in Les Arcs?

For Australians travelling to France to ski during our January summer holidays, we benefit from the cheaper rates on offer in the French ski resorts’ low season.  This happens to be when the French and Europeans go back to work and school after the 2 week Christmas and New Year holiday period.

Europeans and the Brits flock to the resorts through February into March (DO NOT TRAVEL from 5th Feb to 5th Mar 2022 as this is the French school holidays). The slopes are extremely busy, the queues at the lifts are long and the price for accommodation is very expensive during that time.  Even all the restaurants are booked out!

Typically, in January, the snow is dry with the largest build up. It is also the coldest time, so you will need to make sure that you dress warmly. It is still wise to choose a high-altitude resort in case mother nature has not been kind earlier in the season. Bear in mind though, that snow-making is used to supplement natural snowfall in high traffic areas.

So, not only is January the cheapest time to go skiing in the French Alps, it is also the best time to go thanks to the weather conditions, the lack of queues, more availability and choice of accommodation and you get to breathe fresh air with your loved ones, rather than with thousands of other people! 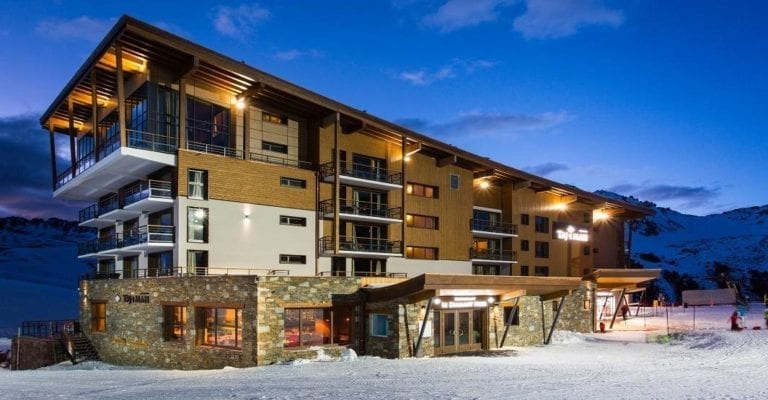 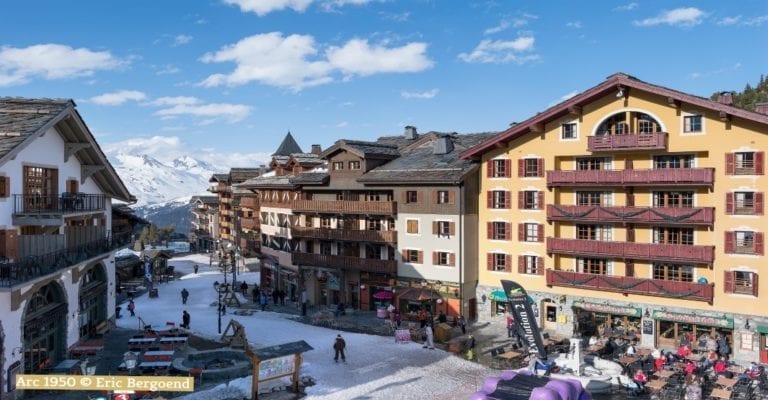 Studio to 4 Bedroom apartments. Pierre & Vacances Premium Residence Arc 1950 Le Village. Arc 1950 is a unique village concept in Europe. A “Clef Verte”-certified, car-free village, Arc 1950 is home to 8 residences, each with its own style and all 5-star rated. The luxury apartments are spacious and comfortable with a balcony or terrace. All the residences are ski-in, ski-out, and you can relax after a hard day on the slopes in the magnificent Deep Nature Spa® certified by Cinq 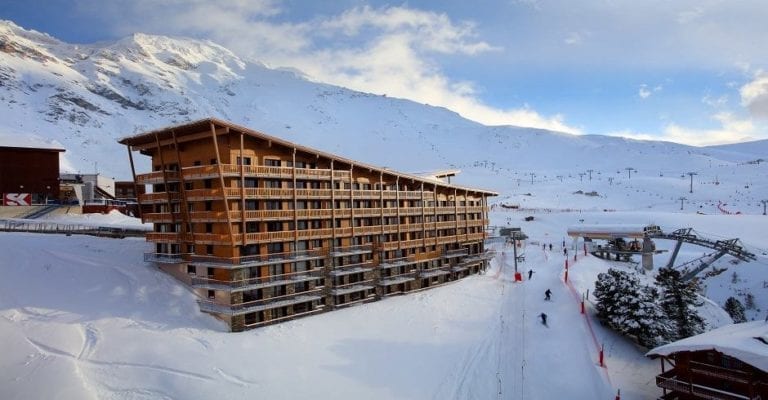 1 to 5 Bedroom apartments. La Source des Arcs. Arc 2000. Opened in December 2015, this 5 star residence is located on the slopes in Arc 2000, at the arrival of the gondola “Cabriolet”. It offers 43 bright apartments, from 2 to 10 people, modern, comfortable and fully equipped. 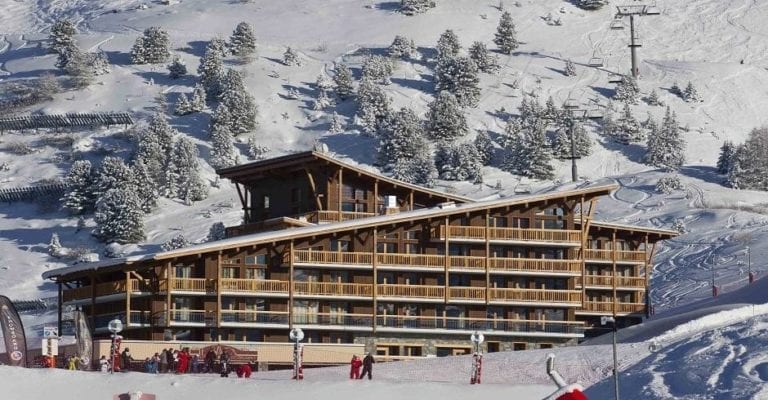 1 to 4 Bedroom apartments. La Cime des Arcs. The Residence La Cime des Arcs which opened in December 2008, is a successful residence as it is located on the slopes, on the main square of the resort, near the ESF (French Ski School) meeting points and the ski departure point. It’s a 4 star residence and it offers 57 very bright apartments, which can accommodate from 2 to 10 people.